She hails from Siwan in Bihar and has just turned 16 this year. Inhuman souls who apparently liked Tuba have turned her face into a nightmare. She lost an eye, breathes through tiny tubes put in her nostril; and after a lot of struggle, doctors could make way for her to ingest liquids alone. A veil and her father are now inseparable from Tuba. 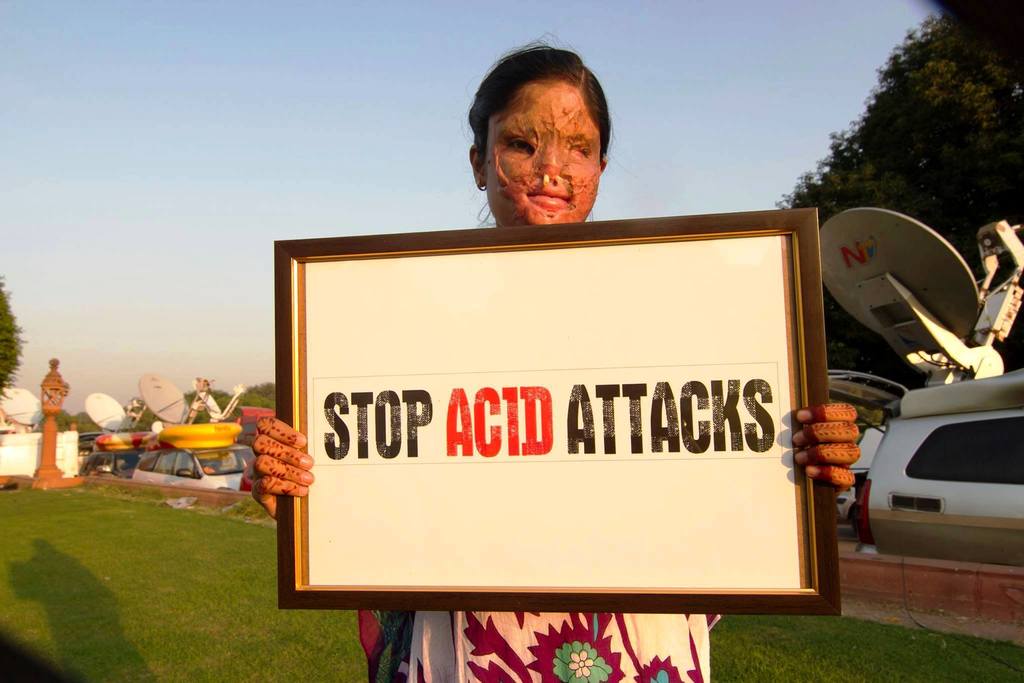 Rupa is 21. They had to chop flesh from her arms to fill her face, but couldn't bring it anywhere close to as it was. She stays with her barber uncle and aunt in Faridabad. Rupa, too, has befriended the veil.

The veil remains inseparable from Nasreen, as well, who is about 34-35, consciously covering her burnt neck, and right shoulder and right half of the face, which are no longer as they used to be.

Shaheen, too, is about 26-27 years of age and resides in Delhi. One of her eyes has been covered with skin, right half of the face and neck is distorted, including her nose and lips. Doctors are trying to save the second eye with more surgeries. She has to be quite brave every time she steps out of her home with a veil and a bottle of eye drops (She needs them frequently, every hour once, in the only eye with sight). Ask her what she wants to do with her career and she goes blank, recomposes herself, only to talk about the case she got reopened recently, while working with Stop Acid Attacks as a campaigner.

The list is long and continuously adding up. Despite the little that has been done to prevent these attacks, new names appear across the country, which have been almost killed with the easily available acid.

The campaigners at Stop Acid Attacks try to reach out to as many of them as possible and bring them back to life. Many go unnoticed, still heading towards isolation and disregard from the society, that discriminates on the basis of appearance.

What we have understood at the campaign is that the problem is deeper than the easy availability of a chemical weapon like acid. It has to do with the family, society and neighborhoods, which encourage their children to treat women as objects. It has to do with the men who have forgotten how to respect a 'NO'. A 'No' to being in love or getting into a marriage; a 'No' to engaging in a sexual relationship. And this is how all of us probably behave. Accepting a 'No' is quite difficult for all of us. Many among us blame the women for what they face. Our acceptance for the criminal only disappoints the girl further as she tries to gather her life.

It is this attitude which is responsible for many crimes against women- from female infanticide to dowry deaths and from rapes to acid attacks- that go on unabated across the country.

Having worked with acid attack fighters, Rakesh has gathered enough inspiration to pedal through the length and breadth of this country on a bicycle, while he gets to experience the country’s untouched hinterland and spreads awareness about acid attacks. He thinks it is necessary that the people across the country know that such crimes against women are happening around them and progress as a society that shuns acid attacks and other forms of violence against women. He will convey this message through puppets, colors and a projector to show cinema to the people who inhabit India's villages and have managed to stay back and haven’t yet migrated to a urban town. He intends to put-up his tent for a day or two in every village that interests him enough to set up the stage for his tamasha. While there is no fixed time for which he will be taking up this journey, its worth, impact and length depend on you to a large extent.

He will cycle as his activist spirit- Sulachchhan Chacha- pedaling against acid attacks and other crimes against women. The Stop Acid Attacks campaign considers crowd-funding as the best source for fuelling any Jan-andolan, and this is what Sulachchhan Chacha is trying to do through this mail. Help him realize this dream ride. While the campaign targets several critical points to change the status of crimes against women in the country, he wants to move around like a foot soldier, who reaches out to the parts where social media and activists have not managed to reach, yet.

Our understanding of a chemical burn can ever be very limited as we ourselves have never experienced anything beyond a burn from a hot liquid or a hot vessel. Acid or any chemical burn puts a person through a lot of physical pain and psychological stress. In the cultural set up that we have grown up around us, it becomes very difficult for the victim girls to get back to life as it was before the attack. Their entire family suffers the dreadful consequences of such a brutal crime.

Sulachchhan chacha’s status will be ‘On the Road’ for a coming few years at least. So, as his friends and fellow campaigners, we want him to have a safe and joyful ride. He needs to be equipped with the necessary gear and supplies. And, for this, he will need your help in gathering the funds required. When the governments fail to listen and respond to the sufferers’ request, the people of a nation must come together to give a shoulder to the crusaders of change. He will begin pedaling from Kerela, so help him gather the required fund as early as possible. The flag-off of his ride is quite close (26th January 2014) already. You could also join him for a few days when he passes through a region of your choice on his cycle. Born in Tariyani, Chhapra, Bihar, Rakesh Kumar Singh has mostly been a media-person for the most part of his life. He has worked almost for a decade with the Sarai and Lokniti programme of the Centre for Studies of Developing Societies (CSDS), Delhi as a media and urban researcher, studying the media markets in Delhi and also edited a magazine series called Medianagar. As the founding editor of Hamshahri, a monthly publication of IGSSS, Delhi, he raised the plight of homelessness. He also had been associated with various initiatives on the issue of gender, caste, and people’s right over mines & minerals and social harmony. He also spent a couple of years as a corporate communication expert with a few corporate firms. Rakesh very frequently contributes columns to several national and vernacular publications.

His first book Bam Sankar Tan Ganes is discussed as a work that will turn out to be a valuable documentation of the contemporary history of rural Bihar. At present, he is wandering to complete his next book Beyond Nagas, apart from playing with the brush and colors.

He draws his ideals from Qurratulain Hyder's Kalandar and strength from Yash Malviya's poem, Samay ki mar sah lena, nahin rukna mere saathi ... A country free of gender discrimination is his final dream. And there haven't been more than three interests that move his life - wandering, tripping, and photography.

We are sharing his account details, where you could contribute whatever little you can financially. If you wish to make his journey fruitful in other ways or wish to join him for a part of his journey, you may write to him at rakeshjee@gmail.com.

can you please share the route details? i will join it in chennai or any nearby location.

Comment by Muhzin on December 22, 2013 at 8:01pm
All d very best for the campaign. May god bless all dos who takes part And make deir journey simpler, reach maximum exposure.