on a training ride for the 300km BRM, we planned to do 220-240 km from pune to satara and back!! 4 of us started from ncl pashan at 9:45 pm, varun, sandeep, gagan and myself, with lights, reflectors adn the rest of it.... except that there were stretches where inspite of the bike lights, the glare of the oncoming traffic made it impossible to see where we were riding!!

fortunately the road is…

My name is Dharmendra and joined the network today. Kindly keep me update with all cycling event in Mumbai

CAN ANYONE TELL ME WHAT IS BRM RACE?PLSSSSS

CAN ANYONE TELL ME WHAT IS BRM RACE?PLSSSSS

One of the biggest qualms of cycling now-a-days in Chembur is the dug up roads on the Fine Arts to Chembur Naka stretch of the Ghatkopar-Mahul Road. The work being undertaken is for the monorail from Chembur to Jacob's Circle. This is a very narrow but vital stretch with vehicles coming from the Ghatkopar taking that critical turn that takes you into Chembur or going straight headed for the Sion-Panvel Highway or going towards Ghatkopar.
The narrowing of the roads and the…
Continue

When Homi and Ashok were on the road

Did you know that Homi Bhathena of Jazz Garden and Ashok Captain, wild life photographer, were ace cyclists once upon a time? Not just ace cyclists, but arguably, the best Indian cyclists in the 1980s. Over mugs of steaming coffee at Ashok’s home a few days ago, the former champions recounted their golden days. Says Homi, “I remember the two of us speeding down Baker’s Hill at b re a k -neck speed on our roadster… Continue

With a bus load of irate citizens in hot pursuit behind them, Bapoo Malcolm and two others pedalled for their life. Literally.

A sudden twist in fortunes had turned the rather tame National Championships in Calcutta in 1972 into a filmy chase, replete with fiery dialogues and life-threatening intentions.

When a local cyclist lead though most of the race, the crowd behaved just fine,… Continue

Cyclothon brings back memories of Mumbai cycling's golden past

Sunday's BSA Hercules Cyclothon provoked memories of a golden age of Indian cycling when Indians not only aspired to become professionals, but became pros and competed in Italy and the US. An age when there were stage races from Pune to Vadodara via Mumbai, Bombay to Goa and the pinnacle, Mumbai to Delhi a 1400 km race over 10 days with nine days of racing, the biggest in Asia then.

One of the key…
Continue

It's after a gap of 3 months that I was taking a look at my bike. It was a bit dusty and had no air in the tyres but otherwise has been in good shape.

This is not a very healthy way to encourage cycling in either of the countries. An eye for an eye...

Taking charge of the cycle

Had given my brother charge of the cycle to see how he handled it and took care of it. Lessons in responsibility as he grew up :). He seems more than happy to not use the cycle after it looses air. I will now have to take care of it for him and ensure that he first enjoys cycling before giving him additional charge of its maintenance. We both use the same cycle, so that could be a sour point.
It might also turn out to be a great place for some brother bonding :).

Today was the best day of my life because i sucessfuly completed cyclothon in 20-25min and second thing is that after the race i drive the cycle from bandra to borivali in >1hr this was the bigest adventure done in my 16yrs of life. I hope this day comes again

The first issue of the Cyclists.in Magazine is launched! Download it NOW.

It's finally here :) The fist issue of the cyclists.in magazine is now online! Free to download and share. You'll need a standard PDF viewer to read the magazine. 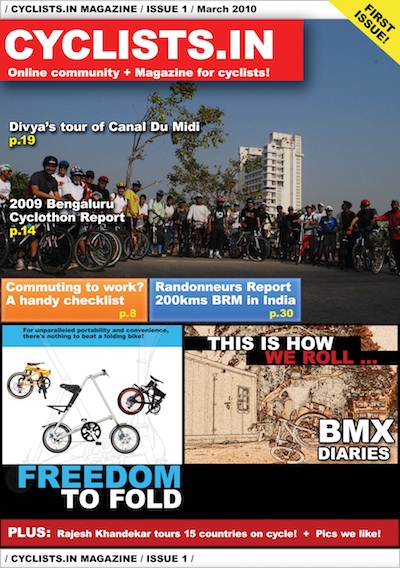 DOWNLOAD NOW!
I'm going to start work on the next issue in a few days. Do let me know what you'd like to read about…
Continue

Today, I had my 3 km ride and man all that fat under the skin finally started getting mobilized and activated...

First day on My bike

Ooohhh...man... that was really cool. Never really knew biking would be so much of fun... today, I am glad that I have tasted the fun of biking ... after so much of reviewing and researching I finally bought Hercules Ryders ACT 110S... I take this opportunity to appreciate and thank Cylists.in along with BOTS, BZ, BBC.. who have directly or indirectly helped me a lot to get back to biking and fun... way to go guyz... thank you everyone...
It was kind of breathtaking when I…
Continue

I was on usual business follow up 3 day trip to my Goa unit. Mostly it is hectic but than since this time it was Sat, Sun & Mon ( 13, 14 & 15th Feb) I managed to take out time on Sunday for Blessing of my place, afternoon family gathering, 45 mins Margao Carnival & than drove to Benaulim Beach.

Monday I left on Cycle my Cuncolim Gauleacotto home at 6.00 am. to go to Betalbatim for usual cycling round & to meet my Pune friends. As I started it was pitch dark…